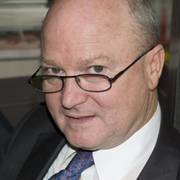 He died December 3, 2015. He was an outstanding neurosurgeon, a great teacher and a fine gentleman.

He has been involved with the WFNS for a long time and had volunteered his services in WFNS education courses all over the world.

A true ambassador of world neurosurgery he and his wife probably had traveled to more neurosurgery meetings and places on the earth than any one of us.

Always smiling, he was a personal friend as he would have been to many of you.